City Lights and Other Stories 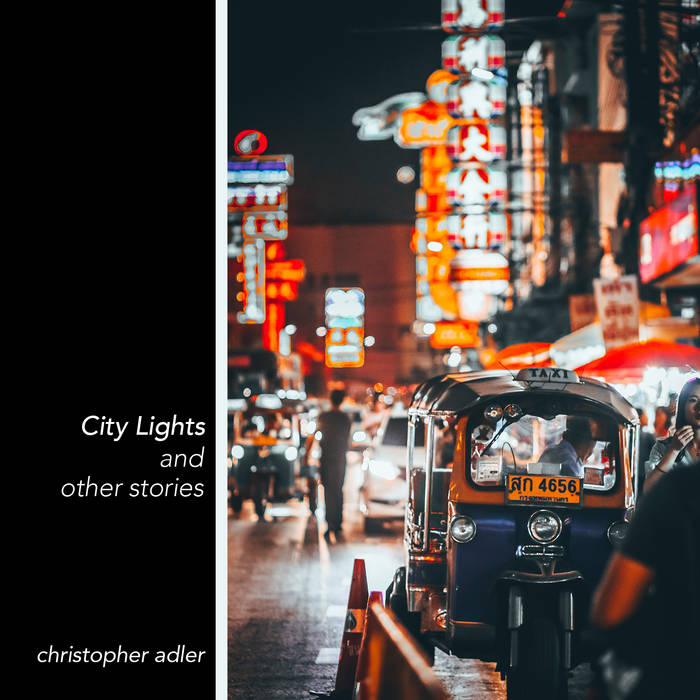 City Lights and Other Stories (2013-18)
by Christopher Adler

City Lights and Other Stories began in 2013 when I composed the dedication piece For Alin for a young pianist, and Air for solo glockenspiel. Although I was performing frequently on piano, both chamber music and improvisations, I had not composed solo pieces for the instrument since 2001. So, I set out to create a collection of pieces reflecting my personal music experiences—from playing pipe organ and piano, to Thai traditional music, to teaching classical and contemporary repertoire in music classes—with the added stipulation that each piece would be moderated in both difficulty and length in order to be suitable for students new to contemporary music. The scores for City Lights and Other Stories are available on my website and may be purchased as a collection or as individual works. The pieces may be played individually or combined into smaller groups, in any order, for performance.

City Lights 1-3 are city portrait pieces, inspired by the music of Meredith Monk (1), my playing as an improviser (2), and electronic dance music (3), as well as by the famous San Francisco bookstore.

Mémoire evokes the music of Jehan Alain, which I played as a pipe organist and which has had a profound effect on my personal style.

Chaetura is the scientific name of a genus of spectacularly acrobatic birds including the Vaux’s Swift (seen migrating through San Diego) and the Chimney Swift.

Berceuse for a Diamond Moon is one of the most technically challenging pieces in the collection, employing all three pedals of the piano to produce layers of color like a pipe organ. It is based on the same mathematical pitch constructions as some of my recent compositions, including the organ solo Construct: for organ.

Khaen emulates the other kind of organ that I play, the free-reed bamboo mouth organ from Laos and Northeast Thailand.

Canon employs contrapuntal techniques common in the Baroque era, including canons with transposition and canons in inversion.

Blues Nocturne melds the static voicing and repetitious surface of American minimalism with the nocturne genre closely associated with Frédéric Chopin, while the chord progressions and melodies are all derived from the blues.

In Snowflakes, each chord is unique in structure and they accumulate as they fall down the range of the piano.

River Rouge is named for the Ford River Rouge plant as immortalized by photographer Charles Sheeler, and reimagines a futurist fascination with industry and mechanization (as in other recent works of mine, such as Violin Concerto and Construct: for organ).

Bandcamp Daily  your guide to the world of Bandcamp

Cannibal Corpse's George "Corpsegrinder" Fisher stops by for an interview